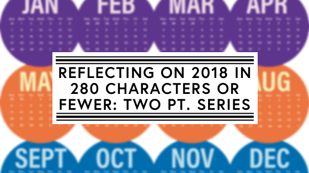 “Automation”, “blockchain”, “food safety”, “freight costs”, “transparency” — these are just a few of the topics that created buzz in the food space throughout 2018. And in thinking about a fun (efficient) way to reflect on the year, we turned to Twitter and the headlines that we could fit into 280 characters or fewer.

In this post (and the subsequent one coming next week), we share three of our Tweets from each month of the calendar year. Taken together, they provide a glimpse into what we felt were some of the top stories of the year. Check it out!

"Without a sense of purpose, no company, either public or private, can achieve its full potential." @blackrock CEO Larry Fink, via @GreenBiz https://t.co/wVi30WMw4s

With a long-term horizon, Fink understands that addressing climate change, addressing the future of work and ensuring a diverse board and workforce are all imperatives. Without them, the growth he seeks will not be sustained.

Since a 2017 survey, the percentage of U.S. consumers saying they ‘strongly agree’ that they are confident of food #safety dropped 14 points, from 47% to 33%. @foodintegrity https://t.co/y4C4Qn1Jmh

I am often asked why consumers have a certain, often inaccurate, impression of the food system. My response is simple: because farmers and food companies haven’t engaged consumers in a way that addresses their underlying concerns.

‘In order to make it work, it really [requires] a lot of coordination, and the retailer supply chain might not be used to this kind of close coordination.’ via @SN_news https://t.co/4PBjvMeuDF

While retailers embrace the order-to-shelf inventory system because it can save space and the time it takes to organize and manage inventory, “if you run out of stock that potentially is much more damaging than keeping inventory.”

The agreement calls for the agencies to “enhance their collaboration and cooperation” on produce safety, and follows the FDA’s Jan. 18 proposal to update recall processes, giving food company’s specific guidelines while addressing concerns public warnings on recalls are too late or contain not enough information.

“We need to let young people know that it’s not bad to be a truck driver.” @SN_news https://t.co/zL9SzOubfo

Drivers are aging out — the average truck driver is 49 years old — and high licensing fees and long drives can turn off younger workers. And a new federal mandate requiring most truckers use electronic logging devices hasn’t helped.

That could mean more efficiently ripening bananas, predicting the shelf life of tomatoes while they’re still on the vine, or prioritizing the flow of green grocery items from the back of the store to the shelf.

Investors are pressuring @Amazon to disclose how much food product goes to #waste in operations. https://t.co/xY5yJy7cNY

Investors have asked the Securities and Exchange Commission to force Amazon to allow shareholders to vote on a proposal asking it to explain its plans to mitigate the environmental impact and cost of wasted food.

Grocers who provide easy access to clear information the shopper wants will be rewarded by a shift in consumer perception, moving from being a simple purveyor of food to a trusted ally in the shopper’s food experience.

As more consumers, notably the so-called “Millennial” generation, opt for healthier diets and a more socially responsible way of life, Danone and its rivals such as Nestle (NESN.S) have been seeking to adapt.

“Working with @SpoilerAlert has enabled us to double down on our mission to operate a sustainable business that generates great value for our customers and community.” @HelloFresh COO and Managing Director https://t.co/IpXX00R9xz pic.twitter.com/TQlgJZPUn7

By joining forces with Spoiler Alert, a company that offers a data-driven technology platform, coupled with professional services, we were able to find the best hunger relief organizations for the surplus food coming out of our three US distribution centers (New Jersey, Texas, California).

According to a new report by @HarvardFLPC, only 12 states have formal #regulations for food donations, six of which pertain only to wild game meat. @broademily https://t.co/UtUwdMf2Uy

Confusion reigns supreme over everything from how to transport donations, to whether food needs to be kept cold, to interpreting best-by dates. Bottom line: Businesses get very little official or consistent guidance and ultimately, are discouraged from donating at all.

New data from Waste Business Journal shows the Northeast is most heavily affected by landfill capacity loss, with an annual rate of loss of 5%. https://t.co/I9MYAQ8hul

Solid Waste Environmental Excellence Protocol (SWEEP) leaders Jim Thompson and Rob Watson cite China's volatile import regulations as a major driver for this decrease in capacity, noting that "the bottom has dropped out of the recycling market."

“As we work through the terms of the services agreement with @Kroger in the coming months, we will be preparing the business for a #transformative relationship which will reshape the food retailing industry in the U.S. for years to come.” @Ocado CEO https://t.co/qTlB6oLoVY

The Kroger deal will see the U.S. chain build up to 20 Ocado-designed warehouses over its first three years—and if Kroger doesn’t meet those targets, Ocado gets compensation. Over the long-term, the exclusivity of the deal remains contingent on Kroger ordering enough of Ocado’s customer fulfillment centers.

To reduce consumer confusion and #foodwaste, @GroceryMakers is recommending companies start using either “best if used by” (for quality standards) or “use by” (for safety standards). https://t.co/XvzNsJ3cQ8

Most products will be "best if used by" since the association says most food is safe to use or consume after the date. The remaining few products will read "use by." That's reserved for highly perishable food that might pose a health risk after the date on the label.

“It’s [cost] thousands and thousands of dollars, it could even run into the millions.” @kroger VP of Corporate Food Technology and Regulatory Compliance on recent #romaine lettuce outbreak. https://t.co/TjTb7VJFSS

Beyond causing more than 150 people to become sick, the E. coli outbreak caused huge losses to growers, a drop in sales for retailers, and disrupted supply chains as restaurants scrambled to find romaine lettuce alternatives — and the impact could linger, according to a report from the Wall Street Journal.

Meal-kit companies are leveraging brick and mortar to connect with new customers, via @Eater. https://t.co/TQ6pSIfGX5

In other words, meal-kit companies are betting on the notion that getting their products into grocery stores will help them reach a new demographic: one that’s willing to bypass everything else, toss a meal kit in their basket, and spend 20 minutes at home learning a little about cooking. But not too much, of course.

The number of shoppers using #online grocery retailers has doubled over the last three years, but "supermarkets remain the key #grocery destination among all channels, hovering around 50% the past few years." https://t.co/FPQRWCqKXr

But for all of the interest and value that online shopping provides, brick-and-mortar stores are still seen as delivering more strongly across all areas of shopper expectations, in particular freshness, price/value, personal engagement, returns and rewards programs.

Did this recap pique your interest? If you want to dig deeper, we have free downloadable Resources on our website, as well as case studies and an ongoing blog where we share learnings in bite-sized pieces. Also, be sure to check back next week for Pt. II of our roundup in 280 characters or fewer.