Our CEO Ricky Ashenfelter was invited to speak at the Ocean State Job Lot send-off event on April 26 to promote the company’s “Three Square Meals” hunger relief program to alleviate the problem of food insecurity throughout the Northeast. The Rhode Island-based chain has grown to 122 stores across New England, New York, and New Jersey since 1977.

The program will distribute over 100 tractor trailer loads of food throughout the year to 15 food banks, which will redistribute to thousands of pantries, kitchens, and meal insecurity sites in Maine, Massachusetts, Vermont, New Hampshire, Connecticut, Rhode Island, New York, and New Jersey. The truck convoy send-off event was open to the public to come cheer on the trucks as they left the Ocean State Job Lot warehouse.

Ocean State Job Lot Executive Director David Sarlitto referred to Spoiler Alert as “the face of the hunger solution,” explaining that collaboration among those who need and those who can feed is critical to solving food insecurity. 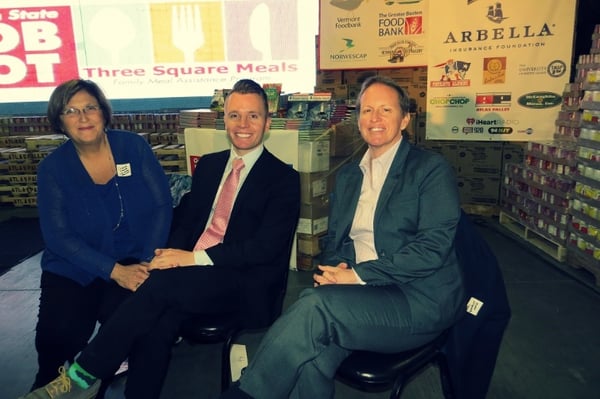 “We’ve seen how technology and the sharing economy have transformed the way that businesses and consumers interact,” said Ashenfelter. “Airbnb with home sharing; Uber with transportation; and hopefully in the not too distant future, technologies like Spoiler Alert with food recovery and waste diversion.”

Read a recap of the event here.

Thanks to U, 2M less people will face hunger. Join the 4/26 food convoy #threesquaremeals https://t.co/UCcL32ioBz pic.twitter.com/WBtxRNmfFv

Thank you @OSJobLot and all of their generous customers who donated during #ThreeSquareMeals to help #EndHunger https://t.co/TP6KDgMuAG