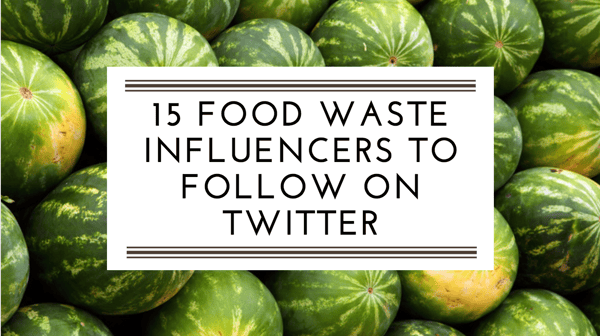 Here at Spoiler Alert, we use Twitter lists to organize different types of audiences we want to engage with. You can do the same! As a sustainability professional, it can be tough to keep up on all of the latest trends. If you’re looking to curate a feed of relevant food waste news, we’ve compiled 15 influencers to get your list started.

Maine Congresswoman Chellie Pingree has introduced two pieces of legislation to Congress in an effort to minimize food waste: the Food Recovery Act (in December 2015) and the Food Date Labeling Act (in May 2016).

Read more: We Waste So Much Food That Congress Might Actually Do Something

As the Director of Sustainability for Sodexo, Christy leads sustainability efforts across Sodexo’s North American 9,000 partnerships and is passionate about waste reduction. In October 2016, Sodexo announced their plan to support the “Save The Food” campaign through promotional materials in the serving and eating areas of its establishments.

Read more: “The Carrot or the Stick: Behavior is the Key to Change” by Christy Cook

As a Waste Programs Manager for Bon Appetit Management Company (BAMCO), a company that offers food services (such as catering and cafe services) to corporations, universities, museums, and specialty venues. Claire leds sustainability and waste reduction efforts across the 650+ accounts that BAMCO supports.

Dan is the chef and co-owner of Blue Hill, which operated temporarily as wastED in March 2015 as “a pop-up devoted to the theme of food waste and re-use.” He’s been a continual advocate for food sustainability and how chefs can minimize their waste impact at the restaurant level.

Dana is Founder & Director of Food Shift, an organization part think-tank, part social enterprise with a mission “to develop a long-term, sustainable infrastructure for recovering excess food that will create jobs for the unemployed.” Most recently, she launched The Alameda Kitchen, which converts rescued produce into value-added food products for food insecure populations while simultaneously providing jobs for formerly homeless individuals.

Read more: This Start-up Aims to Shift Wasted Food to Those in Need

Dana Gunders works as a Senior Scientist at the Natural Resources Defense Council (NRDC) and is fiercely passionate about minimizing food waste. Through her work at the NRDC, she focuses on promoting sustainability throughout our food systems and supply chains. In 2012, she published, “Wasted: How America Is Losing Up to 40 Percent of Its Food from Farm to Fork to Landfill” and “The Dating Game: How Confusing Food Date Labels Lead to Food Waste in America” in 2013.

Since then, she’s been featured in the Just Eat It film and published the “Waste-Free Kitchen Handbook.” In April 2016, she revealed the “Save the Food” campaign, bringing consumer attention to the issue of food waste, aiming to change household behavior.

Emily Broad Leib works as the Director of Harvard Law School's Food Law & Policy Clinic, which released EXPIRED, a short film highlighting how date labels impact food waste. She was recently named to Fortune’s list of “2016 Most Innovative Women in Food and Drink”.

Read more: “Is That Milk Past Its 'Sell By' Date? Drink It Anyway.” by Emily Broad Leib

John is the Chief Sustainability Officer for United Technologies Corporation and co-author of Food Foolish. He also occasionally writes for the Huffington Post and blogs at SustainabilityView.com.

Jonathan blogs at Wasted Food, and published American Wasteland in 2010. He frequently contributes to Food Tank, and he also writes a column called “Dear Wasted Food Dude” for BioCycle.

Listen more: The Ugly Truth About Food Waste In America

Looking for even more waste-related accounts to follow on Twitter? Check out Kristin’s article recent article below.

Sam Kass is a former White House Chef under President Barack Obama. Throughout 2009 - 2014, he served as Obama’s Senior Policy Advisor for Nutrition Policy and worked with Michelle Obama on the Let’s Move! campaign. He’s passionate about sustainability and local foods and became a Senior Food Analyst for NBC News following his time in the White House. Most recently, he’s turned his attention towards minimizing food waste.

Read more: “This Is the Missing Ingredient in the Climate Change Fight” by Sam Kass

Stuart is the founder of London-based organization Feedback, an organization that creates campaigns to end food waste. In 2016, he launched a beer made with fresh, surplus bread called Toast Ale. Watch his 2012 TED talk below.